Climbing the career ladder can be a mental, emotional and financial challenge. Take inspiration and (maybe some notes) from the prominent African-Americans below, each of whom made their mark through the Peace Corps. Representation matters, and this is by no means an exhaustive list! Be sure to tell us about the groundbreaking RPCV’s of color you know so that we can highlight them in the future!

Dr. Darlene Grant became Senior Advisor to the Peace Corps Director in August, 2020. In this role, Dr. Grant works with agency leadership to increase and champion a diverse staff and volunteer corps. She makes recommendations aimed at increasing inclusiveness, removing barriers for underrepresented groups, and creating a more just and equitable Peace Corps.

Dr. Grant’s path to the Peace Corps began after 18 years as a professor of social work at the University of Texas at Austin. There, she taught graduate and undergraduate courses in social justice, clinical practice, research methodology, and working with at-risk youth. She directed funded research projects focusing on juvenile probation, teen pregnancy prevention, and the domestic violence experiences of incarcerated women.

From 2009-2011, she took a leave of absence from UT-Austin to serve in Cambodia as a TEFL teacher and teacher trainer. During her service, Dr. Grant implemented the Wat Norea Peaceful Children’s Home II Solar Pump Project – Cambodia, as well as the Battambang Regional Teacher Training Center Water and Sanitation Project in partnership with Water Charity. In 2012, she became country director in Mongolia and served in that position until 2015. After her retirement, she went to Kosovo to serve as a country director once more. 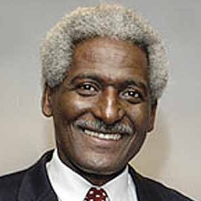 Palmer received his Bachelor of Arts on scholarship at Emory University in Atlanta, Georgia. The following year he joined the Peace Corps as a teacher in Liberia.

In 1973 Palmer obtained his Master of Education degree with an emphasis in African history from Texas Southern University; and in 1978 he received a Doctorate of Education with a concentration in Higher Education and African Studies from Indiana University in Bloomington, Indiana.  For the next three years he taught history at Wake Forest University in Winston-Salem, North Carolina.

In 1982, Palmer left academia to work for the United States Foreign Service. His first overseas assignment was as vice consul in the Dominican Republic (1982-1984).  He then worked as a personnel officer in U.S. Embassies in Montevideo, Uruguay, and Asuncion, Paraguay (1984-1986).  Returning to the U.S. in 1986 he became a staff assistant to the Assistant Secretary of State for African Affairs (1986-1987). In 1987 Palmer was assigned to the U.S. Embassy in Freetown, Sierra Leone.

Beginning in 1989 Palmer took a leave from the Foreign Service to become a Pearson Fellow to the President of University of Texas at El Paso. While there he helped implement faculty and student exchange programs with Mexico and the rest of Latin America and served as a consultant for International Affairs.

Almer served as President of the Inter-American Foundation from 2005 to June 2010. In June, 2010 President Obama nominated Palmer as the next United States Ambassador to Venezuela. However, Venezuelan President Hugo Chavez announced that he would not allow Palmer to take his post.  President Chavez accused Palmer of making critical remarks about his government including accusing members of the Chavez government of having ties to leftist Colombian rebels.

From 2012-2015, Palmer served as U.S. Ambassador to Barbados and the Eastern Caribbean which includes the small island nations of Antigua and Barbuda, Dominica, Grenada, St. Kitts and Nevis, St. Lucia, and St. Vincent and the Grenadines. 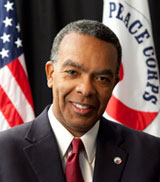 Williams began his career as a high school teacher in Chicago. He decided to volunteer for the Peace Corps after hearing speeches by President Kennedy and Sargent Shriver, and then talking to a fellow teacher from the same alma mater that had volunteered in Jamaica. Williams supported the Peace Corps in the Dominican Republic for three years. While there, he taught rural school teachers seeking high school diplomas, then worked with the Ministry of Education on developing educational curriculum. Williams also trained teachers for the country's first private university, Universidad Madre y Maestra. Upon his return to the United States, Williams served the Peace Corps as a Coordinator of Minority Recruitment.

In 1978 Williams joined USAID, where he worked for 22 years, as a foreign service officer. He was first promoted to Director of the Private Sector Office in the Latin America and the Caribbean Bureau, then promoted to senior management positions, serving as the Mission Director for the Eastern Caribbean Region based in Barbados, Deputy Assistant Administrator for Latin America and the Caribbean, Assistant Administrator for LAC, and as the head of the Executive Secretariat for USAID. During this time he attained the rank of career minister in the Senior Foreign Service. When Williams left USAID, his title was Mission Director to South Africa. In 2000, Williams left USAID to become Executive Vice President at the International Youth Foundation, a transnational nonprofit that leverages corporate donations to assist young people in the developing world. In December 2003, William left IYF to become a Vice President for International Business Development with RTI International, a nonprofit research corporation that depends on USAID contracts for about one-third of its revenues. In July 2009, President Barack Obama nominated Williams to serve as the new director of the Peace Corps and in August, Mr. Williams was sworn in as the eighteenth Director of the Peace Corps. Williams is the fourth director in the Peace Corps’ history to have served as a Peace Corps Volunteer. At the time there was a problem with Peace Corps volunteers being sexually assaulted abroad. Williams testified to a congressional panel that the Peace Corps had not done enough to protect its volunteers and he would make it a priority to change that. Williams worked with Congress to institute reforms, such as heightened security, training and support for victims. 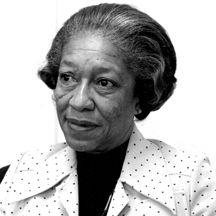 Payton accepted the position of field assessment officer for trainees for the newly created Peace Corps in 1964. Although women were usually not given overseas staff positions, in 1966 Payton became Director for the Eastern Caribbean region stationed in Barbados.  As one of only two female country directors, her performance was critical in demonstrating that women could effectively do the job. Her success resulted in gender being dropped as a qualifier for overseas staff positions. After a seven-year absence, Payton was again called to the Peace Corps in 1977, this time by then US President Jimmy Carter who appointed Payton Peace Corps Director.  She served for less than two years.  Her strong views about the Peace Corps’ mission and its implementation strategies, especially regarding the importance of Peace Corps volunteers being nonpolitical, clashed with those of Sam Brown, then Director of Action, the agency with jurisdiction over the Peace Corps.  Payton’s refusal to back down on issues she felt were vital to the Peace Corps’ very existence and the surrounding publicity led President Carter to ask for her resignation.